Christmas? In May? Well go on then

Can you help Santa?

All year those naughty little Elves have been taking Santa’s sleigh out without asking permission.

So Santa had no choice but to lock it up at night.

Oh no it is Christmas Eve and Santa cannot find the keys what is he to do???

Can you save Christmas?

Last year, in May of 2020, Gord and I were scheduled to venture north for a tour of what we had heard were some of the UK’s most beloved escape games across the Midlands and Northwest of England. Of course, that tour never happened. Thankfully rather than being cancelled entirely, it was postponed. But it was not merely postponed; oh no, once we were permitted to venture out into the world again it was expanded. Top Escape Rooms were not on the original list of companies to visit last year, but as Worcester was a perfect stop to break up a rather long journey, it seemed like a crime not to stop for a game… or four. Especially since it was only a ten-minute detour off of the M5.

Located in the Top Barn Estate, Top Escape Rooms are easy to find, with plenty of onsite parking. There is even a lovely little cafe and a coffee shop located within the estate, both just a few minutes walk from the escape rooms. But amenities aside, the benefits of being located here are apparent when you see the space that Top Escape Rooms have to work with, as they have rooms not just for their games, but at least two comfortable and spacious reception areas, one of which we were led to upon entry. Thanks to Top Escape Rooms taking some of their games online to survive the pandemic, we had already been hearing some very positive things about their games, but what we hadn’t heard about was just how lovely Adam and Vicki, owners of Top Escape Rooms and our hosts for the day, are.

Following a bit of a chat it was time to get down to business, and with four games to choose from, the decision of which to play first was the first puzzle, especially as it was to be the first game of a rather epic trip. So rather than make a decision, we left it to Adam and Vicki. Given that our last physical escape room was played on Halloween, just days before UK Lockdown 2.0, it seemed rather serendipitous that their choice for our first game would be Jingle Joyride – after all, we had essentially skipped Christmas. And so, it was time to save Christmas… In May.

Top Escape Rooms are strictly adhering to the legal requirement to wear masks when participating in indoor leisure activities, with no exemptions or exceptions, and the staff adhere to this as well. NHS Track and Trace is in use, with all members of the party required to check-in. Hand sanitiser is readily available in the common areas, and throughout the games, and we were asked to wash our hands upon entry to the building. Games and reception areas are sanitised between teams, and games are staggered so that only one team will be present in each reception area at any one time.

Jingle Joyride actually began before we even set foot inside the game space, as we were greeted by Vicki in the guise of a happy and joyful little elf, and led around the corner to receive our mission(s). Stepping through the door to Santa’s living room brought a sense of cheer I didn’t know I had been missing after the strangeness of Christmas 2020. While the room was simply decorated, there was a feeling of festive fun that permeated the air.

Jingle Joyride progressed in a non-linear manner, which allowed Gord and I to split up to search and solve – which was useful since I got hung up on one particular element and this structure allowed Gord to find things to do rather than watch me struggle. With a range of festive tasks, the theme was present throughout, and the game took us on a lovely little adventure as we searched for Santa’s sleigh keys and saved Christmas (admittedly, the urgency to find them quickly was somewhat lacking in May – after all, he’s very likely to lose them again before December in his quest to hide them from those naughty elves.)

Christmassy, festive cheer aside, holiday rooms are my (our) nemesis. I don’t know why. It’s possible that because they’re generally family-friendly, and therefore typically on the “easier” side, I am lulled into creating my own, more complex (wrong) puzzles, but whatever the reason, I have yet to play a Christmas game that I did not struggle with; Jingle Joyride is no exception. But in this case, I’m going to blame it on being rusty, having not played a physical game for over half a year. (That’s my story, and I’m sticking to it.)

My struggles (stupidity) aside, the puzzles were actually incredibly fair, sometimes even very clever, and occasionally a little sneaky. Although, to be honest, I should probably have had Gord write this review as I spent ages on one particular puzzle that was really much simpler than I was making it, and left Gord to solve about the first half of the game on his own. But the puzzles I did see were exactly the sorts of things I would expect to find in an escape room, with a bit of searching, logic problems, some basic maths, observational challenges, and even a bit of lateral thinking, plus a fun little game or two. The puzzles were thematic and the game used a blend of padlocks and some fun little bits of tech to keep things interesting.

Jingle Joyride also had a secondary search element that is separate to the main mission of locating Santa’s keys, making the game an ideal choice for families where younger children may not be up to getting stuck in with the puzzles (although they absolutely could and should), but still want to have fun and explore.

The screen located within the room ensured that we were always aware just how much time we had left to find Santa’s keys, but also provided clues for when I was being particularly dim. We did need a few clues, generally due to making assumptions about a puzzle, and then being unable to re-think it, and once just because I was being a bit useless. But Vicki, or perhaps Adam, knew just when to chime in to alleviate any frustrations and keep the flow of the game going.

Due to our experience, whoever was behind the scenes always chimed in with the question, “Would you like a clue?” to which we could either say yay or nay. Whenever we did finally accept defeat and accept the help, (which was every time, since clearly there would have been no timely intervention if we weren’t being a bit thick-headed) the clue was always just enough of a nudge to get us back on the right track, without giving too much away.

It’s no surprise that Top Escape Rooms are claiming Jingle Joyride is proving to be one of their most popular games.  I think after the year we’ve had, we could all use a little Christmas Cheer, even in the midst of summer, and Jingle Joyride truly was a joy to play. 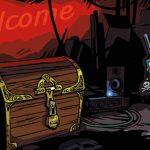