“Under the sea, Darling it’s better”

Almost ten thousand years since the mysterious city suddenly sank into the emerald depths of the ocean. The stunning citadels and majestic statues now lay sunken and forgotten on the sea bed. Once a powerful city ruled by the famed Poseidon. Now, corals creep up through the cracks in the architecture, moss covering the once pristine temples and the brightly coloured fish dart playfully in and out of the windows. Silence deafens the atmosphere surrounding the excluded fortress. Occasionally, a hammerhead will sweep through, disrupting the peaceful solitude, but for the most part, this is the city that time forgot.

You and your team are on the cusp of a major breakthrough. After deciphering thousands of old scrolls recovered from the seabed, it appears that Atlantis is due to resurface today in an angry charge to destroy the world. Poseidon was never avenged and he intends to share his misery with the mortals who exiled him in a bid to anger the gods more particularly, Triton. A thought crosses your mind to something you read a few weeks ago about an offering left for the gods from Poseidon. It was supposed to be his ticket into the high council. Assuming you can track down the location of the offering, recover it and return it, you may be able to stop the mass cataclysmic destruction about to reign down upon the world. Time is ticking and you must do whatever it takes to stop Atlantis from resurrecting.

It was the final day of our 59 game, two week road trip, and we planned to stop off at Trapp’d in Wellingborough for a few games. We had planned to play their games in Northampton too, but due to an issue with their power, we were unable to do so – so just the three games today (Atlantis, Forsaken and Legend of Drakon).

We parked in a cheap car park just up the road from the venue and then walked down to Trapp’d. When we arrived we were greeted by a couple of members of the team and were shown around to the waiting room where we had a little chat. If you’ve played at any of the Trapp’d venues then you’ll be very familiar with your surroundings, they obviously buy black paint in bulk! But of course, the black is broken up by the previous team’s ‘graffiti.

After stashing our personal belongings in the lockers provided, we received our health and safety briefing for Atlantis and then followed our GM, Chelsea, down the corridor to the entrance to the room where she proceeded to give us our mission briefing. Ironically, last time we tried to play Atlantis we couldn’t, the Wellingborough branch had flooded so Atlantis was literally underwater. Anyway, now we were ready to play!

Covid-19 Procedures: masks were required in all common areas of the venue, but we were told we could remove them in the game (we left them on). All staff were wearing masks and there was hand sanitiser in reception, although no NHS track and trace was in place. We did see one other team but never came into close contact with them.

As with pretty much every game we’ve played at Trapp’d, the space was massive; ok, not right from the beginning but when you look at overall floor-space for Atlantis, you could have squeezed two games in! The staff in Wellingborough seemed to think Atlantis was their most difficult game and we could probably see why, although as we got out in less than thirty minutes, it wasn’t too taxing.

First impressions when entering Atlantis were good, there was some nice ambient noise (sonar and water) and the set design throughout was spot on, with good differentiation between the two areas (the lighting effects also helped with this). It’s worth pointing out that the game is all on one level, just one big step to get in, but then it’s pretty even – although there is a fair amount of sand. Trapp’d also made the decision to actually lock us in this game, so if you’re not a fan of being locked in, you may want to reconsider.

We particularly enjoyed the ending as this brought the story full circle and was clearly a defined ending. The only issue we found with the set design was that it was a bit dark in places and would have benefitted from a torch or two, in fairness though, the lighting was generally adequate.

We found Atlantis to be a relatively linear game, although the opening section did seem to have two possible starting points. After that, though, it seemed to be one thing leading you on to the next. We did have a minor issue early on which caused us some confusion – as a bit of tech wasn’t working we incorrectly dismissed something as set dressing, however when it did come back online, we completely missed it so needed a little nudge to tell us to look again.

There were a variety of puzzles in this underwater domain; maths, logic, wordplay, observation, navigation, and a physical puzzle. Having played a similar physical puzzle in a room not long before this, we were very pleased to see that the equipment here was definitely up to the challenge! The maths puzzle was a little tricky (or I assume it was, I left Liz to do it), but fortunately, paper and pen were provided to make it a little easier.

The puzzles mostly resulted in padlocks or tech, but when tech opened something it was accompanied by a noise to make sure it wasn’t missed. One particular piece of tech felt like it could have used a bit more signposting as we thought it was again just set-dressing, but actually, it wasn’t – that was probably on us, it just felt a little weak.

Chelsea did a good job of keeping an eye on us and when we needed those nudges she chimed in quickly enough and ensured we weren’t left feeling frustrated. Tech issues happen, and it’s how they are dealt with that makes the difference. I’m not sure Chelsea knew about one of the issues we had, or if she did she fixed it but didn’t say anything, either way, we didn’t lose too much time on it.

When clues did come in, they were over a speaker system and were easy to hear. It would have been nice if they were perhaps in character somehow just to add to the immersion, but it’s not a game breaker.

There was no clock/timer in the room so there is no way of knowing how long you’ve been in there for. We thought we had been in there much longer than we did, so when we got out in less than 30 minutes, we were quite surprised.

Credit to Trapp’d for doing something different with this room and the set design was spot on. It would have been nice to have seen a few more puzzles as the space was massive and could take them, but it was still an enjoyable time under the sea.

We were also lucky that we visited on National Doughnut Day. Trapp’d were giving teams who finished their games in less than 35 minutes a doughnut (per player) – we could have had a lot of doughnuts that day! 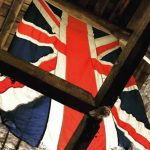